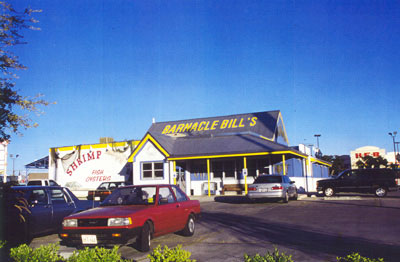 The Barnacle Bills Seafood Restaurant chain is a long standing client of Stephen J. Kramer Architecture + Design.  There are currently six locations in San Antonio and all of them have been designed by the firm.  We initially worked with the Owners to come up with the exterior concept for the look of the building.  What we tried to achieve was the look of a Texas Coastal Bait Shop.  The idea being that facility started with a small simple pitched roof shack and had been added on to number of times over the years.  Looking at the design for the original buildings one can see how this concept was accomplished.

The use of simple materials including painted concrete block, corrugated galvanized metal roofing, and painted structural steel canopies in addition to painted wood siding completes the building theme on both interior and exterior of the restaurant.  The Owners also hired and worked with an interior designer to collect used fishing gear including boats, motors, bait buckets, maps, poles and other items to furnish the restaurant and enhance the desired atmosphere.  The final touch in completion of the interior of the restaurant consist of hundreds of fishing photos featuring restaurant Owners and their friends and family pictured with their catches. In addition elaborate air brushed murals of different coastal scenes are used inside and out and designed to look like windows on the interior or items on the walls of the exterior of the building.  As additional restaurants were built the design has became simpler and more standardized with the idea of creating a standard prototype for future restaurant locations.