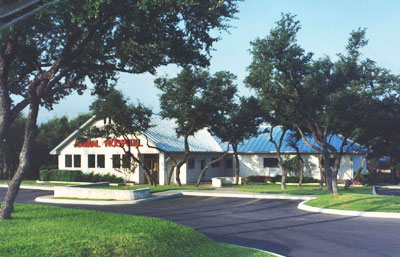 The Castle Hills Companion Animal Hospital was the first veterinary project completed by Stephen J. Kramer Architecture + Design.  The Owner had originally purchased a small existing house on NW Military Hwy and had hired a national firm specializing veterinary clinic design to remodel this building into his new clinic.

During the course of the project design he realized he needed to work with someone located in San Antonio.  He knew enough about what he wanted so that he provided the basic building plan layout.  We worked in collaboration with the Owner and during the design process determined that it would be more economical to demolish the existing structure and build a completely new facility on the property.  Based on the Owner’s direction the facility was designed using native Texas limestone and standing seam metal roof in order to allow it relate to the residential character of the surrounding neighborhood.  The facility was sited to allow as many of the existing live oak trees to remain while providing adequate client parking in the front as well as staff parking in the rear of the building.

The interior of the building features a two story waiting and reception area with a stairway to second level offices, meeting rooms, and an efficiency apartment to be used when monitoring emergency cases overnight.  The clinical areas of the facility house the typical exam, treatment, and surgery rooms along with extensive ward and kennel areas for animal boarding.  The kennels themselves are constructed of extremely high quality materials such as stainless steel gates, glazed block walls, and rubberized steel mats that allow the animals to be elevated off the concrete floors of the runs.  The kennel itself contains automatic electrical ventilation fans and louvers so that during the milder months the heating and air conditioning cost can be minimized.

Additionally all of the trench drains in the kennel have automatic flush systems to minimize the labor involved in cleaning.  As a testimony to both the building design as well as the practice management at Castle Hills Companion Animal Hospital it was voted the 1992 Veterinary Economic Hospital of the Year.